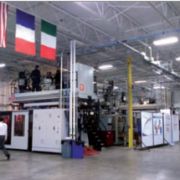 Located close to Detroit, the Breton plasturgist ActuaPlast has taken full advantage of its skills in the blow molding technology especially for ducts aimed at the automotive industry since 2014.

Managed by Virginie Tymen Perennou and her husband Stévan, ActuaPlast North America, subsidiary set up in Livonia (Michigan), has made an excellent start since 2014.

Stimulated/supported by the automotive industry, a sector undergoing a big revival, it should reach a sales revenue of 2.5 Million Euros this year with approximately 10 employees.

In addition of its injection, rapid prototyping, design and molds manufacturing abilities, ActuaPlast takes full advantage of its experience in developing molds and in producing hoses and ducts in 3D blow molding technology.

Tier 2 and Tier 3 supplier of many automotive suppliers like Hutchinson and Contitech, this subsidiary is equipped with 3 Italian ST Soffiaggio blow molding machines in Livionia. The use rate of these machines keeps on growing for development, for prototyping, but for production as well. The American automotive market is undergoing tremendous changes. It used to favor heavy-duty engines and consequently used 3 times less turbochargers than in Europe whereas now it produces more and more vehicles equipped with a turbo engine and has a large use of hoses and ducts blown in 3D.  The same applies to trucks and utility vehicles. In order to overcome the lack of local existing capacities, Actuaplast is growing into becoming the main provider of pre-series molds and productions.

This is the workshop at ActuaPlast NA during the open house last March 2016. In total Actuaplast is now equipped with 9  2D/3D blow molding machines in France and in the USA.

Evidence indeed of the skills of ActuaPlast NA in 2D and 3D blow molding technology : on the 15th and 16th March 2016 were held 2 technical days at ActuaPlast North America.  Organized in partnership with the chemist DuPont, and the blow molding machines manufacturer ST Soffiaggio Tecnica, they attracted nearly one hundred industrial persons and contractors. On a ASPI 150.2 type machine, several demos were made to blow mold ducts in TPE Hytrel material and in PA Zytel material as well. There was also an infrared welding station available to weld Zytel components. Beside technical presentations, Actuaplast was able to highlight its ability to manage complete projects, parts and molds design, prototyping, pre-series production, with a cycle time optimization, weight and wall thickness reduction of the parts.

Established in 2001, the ActuaPlast Group, managed by Ronan Perennou keeps on growing quickly. Its total sales revenue should reach 15 Million Euros this year with 110 employees, including the 10 additional employees who will be hired this year (20 in 2015). Included in this sales revenue, the prototyping and mass productions (4 million parts produced in 2015) represent approx. 45% in value, an increasing importance. The mold manufacturing activity is still preponderant as the company produces 300 molds/year. It is also worth noting that this figure does not include the Chinese structure, a sales office based in Hong Kong and a factory of 50 employees in Dongguan, a WFOE that Mr Perennou created on his own behalf and whose results are not included in the Group’s figures.

Working in 3 shifts of 8 hours, 5 days a week (working on Saturdays is being analyzed), the Group carries on investing powerfully. To strengthen the machinery of its French and American companies, it is going to invest approximately 2.5 million Euros in 2016 in new blow molding machines, injection presses, machining equipment and 3D printing machines. A DMLS EOS M290 machine (Direct Metal laser Sintering) has just been installed in La Forêt Fouesnant, France and it will be aimed at the aerospace industry.

This site uses cookies. By continuing to browse the site, you are agreeing to our use of cookies.