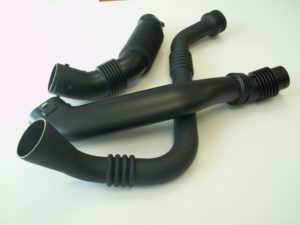 In May, the French automotive supplier purchased two new Milacron injection machines — one with 55 tons clamping force and the other a 220-ton press. The company also purchased an automatic finishing machine from Italian industrial equipment supplier GS Finishing Machines srl that will be delivered at the end of October. The company declined to comment on how much it had invested in these new machines.

ActuaPlast has three blow molding machines with high-temperature capacity for engineering materials at its Livonia facility.

“Before, we had to subcontract the injected parts to the supplier, and now we’ll be able to do everything in-house,” said Virginie Perennou Tymen, administrative manager at ActuaPlast, in a Sept. 15 interview at the Michigan facility, which opened in 2014.

The company has three Ritmo manual welding machines for producing prototype parts, but Tymen said the addition of the automatic finishing machine will enable ActuaPlast to offer customers a finished blow molded part for mass production.

“With these new machines, we plan to double our sales revenue,” she added.

To run the new injection presses, the company has hired a plastics injection molding processor and plans to hire a plastics machinist/welder by the end of the year. In addition, Perennou Tymen said ActuaPlast will hire seven other employees over the next year to cover sales, quality, project management, technician and operator roles.

ActuaPlast manufactures various under-the-hood technical parts, such as air intake manifolds and air filters manufactured with injection molding and 2D or 3D blow molded ducts for Tier 1 and Tier 2 suppliers. The company has headquarters in La Forêt Fouesnant, France, with an additional location in China. ActuaPlast Group has a total of 170 employees and plans to reach sales of 17.3 million euros ($20.7 million) in 2017.

This site uses cookies. By continuing to browse the site, you are agreeing to our use of cookies.

We may request cookies to be set on your device. We use cookies to let us know when you visit our websites, how you interact with us, to enrich your user experience, and to customize your relationship with our website.

Click on the different category headings to find out more. You can also change some of your preferences. Note that blocking some types of cookies may impact your experience on our websites and the services we are able to offer.

These cookies are strictly necessary to provide you with services available through our website and to use some of its features.

Because these cookies are strictly necessary to deliver the website, refuseing them will have impact how our site functions. You always can block or delete cookies by changing your browser settings and force blocking all cookies on this website. But this will always prompt you to accept/refuse cookies when revisiting our site.

We fully respect if you want to refuse cookies but to avoid asking you again and again kindly allow us to store a cookie for that. You are free to opt out any time or opt in for other cookies to get a better experience. If you refuse cookies we will remove all set cookies in our domain.

We provide you with a list of stored cookies on your computer in our domain so you can check what we stored. Due to security reasons we are not able to show or modify cookies from other domains. You can check these in your browser security settings.

These cookies collect information that is used either in aggregate form to help us understand how our website is being used or how effective our marketing campaigns are, or to help us customize our website and application for you in order to enhance your experience.

If you do not want that we track your visist to our site you can disable tracking in your browser here:

We also use different external services like Google Webfonts, Google Maps, and external Video providers. Since these providers may collect personal data like your IP address we allow you to block them here. Please be aware that this might heavily reduce the functionality and appearance of our site. Changes will take effect once you reload the page.